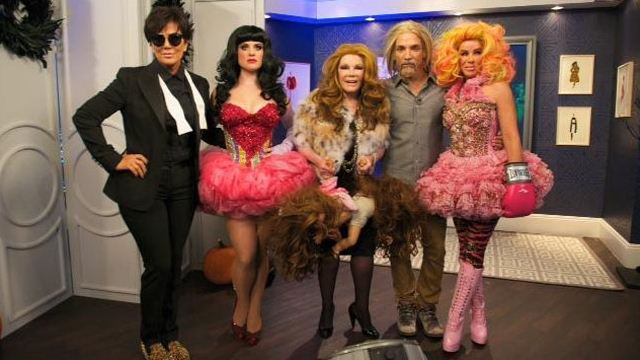 The Writers Guild is urging members not to work on the Joan Rivers-hosted E! program.

Writers for E's Fashion Police are going on strike two weeks after filing a complaint that could result in the Comcast-owned cable TV network having to pay more than $1 million collars in back wages.
OUR EDITOR RECOMMENDS

The strike against both E! and Rugby Productions -- the production company of Fashion Police star Joan Rivers -- is sanctioned by the Writers Guild of America (WGA), whose East and West branches urged members and non-members alike not to work on the program. "Writers on E! Network’s comedy-variety show, Fashion Police, walked off their jobs today to gain Writers Guild coverage and to protest the company’s unfair labor practices," said WGA letterposted online Wednesday. "Although Fashion Police is one of E!’s highest-rated shows, its writers lack health and pension benefits, residuals, and industry-standard compensation. When the writers began to organize earlier this year they were met with threats and delaying tactics," the missive continued, encouraging "non-members to respect the strike and support these writers, who are taking a stand against substandard wages and conditions." STORY: 'Fashion Police' Writers File Complaint Against Joan Rivers for Back Wages Earlier this month, Fashion Police writers filed claims with the California Division of Labor Standards Enforcement (DLSE), alleging that E! has broken state labor law by not compensating them for all of the regular and overtime hours they’ve worked. (Last week, a similar suit was launched against Rivers' Rugby Productions, with scribes who worked on the comedy-variety show claiming that they are owed about $400,000 in back wages.) Fashion Police, co-hosted by Rivers, Giuliana Rancic, Kelly Osbourne and George Kotsiopoulos, isn't covered by a WGA agreement. "This is very simple,” said Fashion Police writer Ned Rice in a statement. “We have earned the right to be a Guild show, we deserve to be a Guild show, and we want to be a Guild show. The ball is clearly in E! and Rugby’s court right now and we’re ready to go back to work on Fashion Police just as soon as they sign a WGA contract." Meanwhile, another writer, Eliza Skinner, has issued a stern warning to potential scabs on her Tumblr blog. "In most of the jobs I’ve gotten I’ve been recommended by other writers and hired by showrunners (people who used to just be writers). It’s in your best interest to create a reputation for standing WITH writers, and for being part of the team," she wrote.