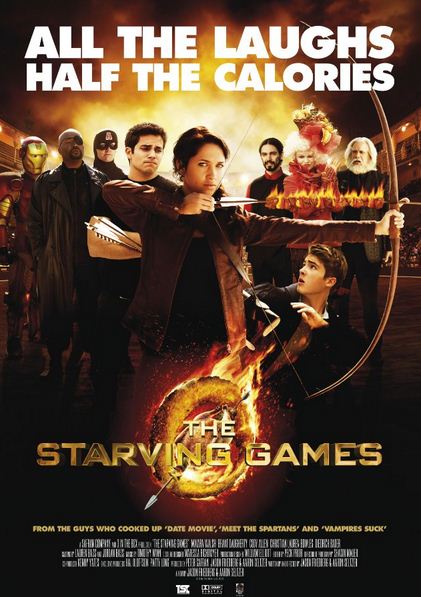 THE BUZZ: In the movie world, you know you've created a cultural phenomenon when theEpic Movie guys target you, and we're sure Jason Friedberg and Aaron Seltzer's spoofs look nice on any studio's balance report at the end of the year. And in this case, we can totally see Jennifer Lawrence watching this and laughing along while pounding beers.

Set in the most depressing corner of a postapocalyptic future, our heroine Kantmiss Evershot (Maiara Walsh) volunteers to take her manipulative younger sister's place in the seventy-fifth annual "Starving Games." In doing so, she must leave behind her smoldering just-a-friend Dale (Brant Daugherty) and team up with the geeky baker's son Peter Malarkey (Cody Allen Christian) in a fight for her life. But wait, there's more! She could also win an old ham, a coupon for a foot-long sub at a six-inch price, and a partially eaten pickle! In The Starving Games, Friedberg and Seltzer's sixth cinematic spoof of box-office hits, the prolific parody duo has its sights trained on the adventure blockbuster The Hunger Games! It's all the laughs and half the calories as they sling dozens of cock-eyed, barbed arrows at sci-fi, action and fantasy films from The Avengers and Oz the Great and Powerful to pop culture characters and celebrities like Harry Potter and Taylor Swift.Written by Ketchup Entertainment