Walking with the Enemy 2013 Movie

Walking with the Enemy 2013 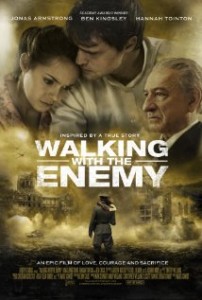 
A young man, separated from his family in WWII, disguises himself as a Nazi SS Officer and uncovers more than just his family whereabouts.

Jonas Armstrong, Ben Kingsley, Hannah Tointon
THE BUZZ: This film's true-story narrative and the presence of Ben Kingsley should help distinguish it from other specialty releases as the summer-movie season arrives. Cool to note that star Jonas Armstrong studied acting with one of Kingsley's sons.